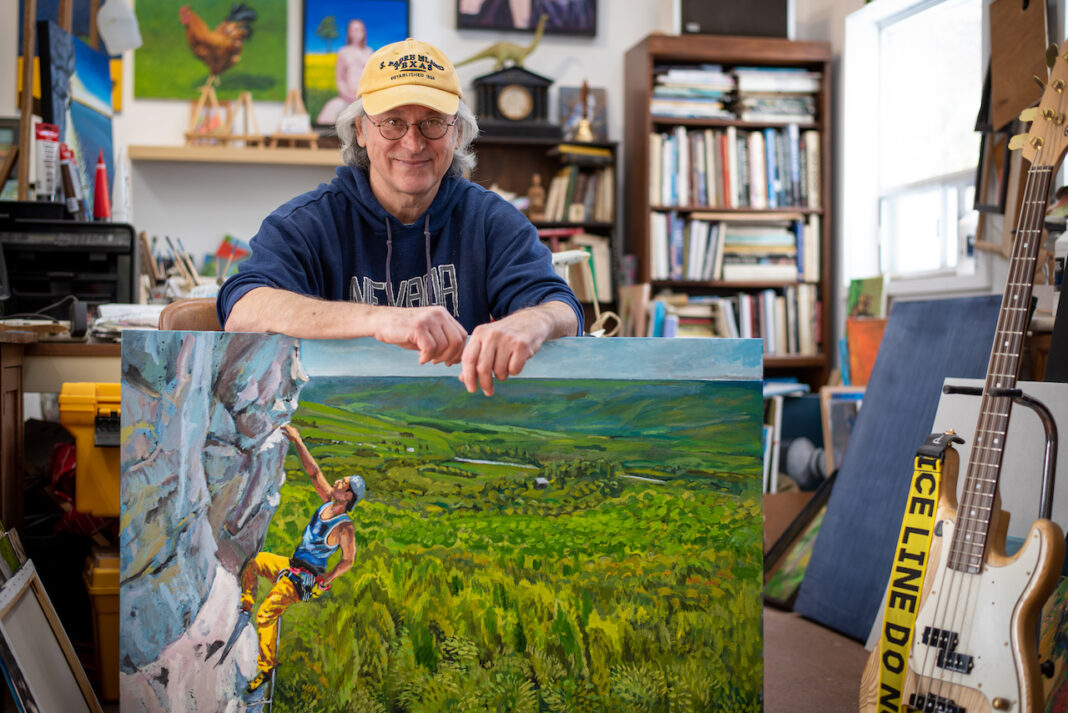 Deft and purposeful, fingers taut with tension move across the surface. Landing here, reaching just … there. In this way the route forward reveals itself. At times the brow furrows in concentration, every project has its crux after all, but what is a challenge except an opportunity to improve? With minimal gear on hand, technique is everything, and one wrong move could undo weeks of planning.

Robert Pointer, of Wildwood Art Adventures, has not rock climbed once (not yet at any rate), but despite that oversight, he’s gotten up to some fairly rad stuff in his sixtyish years. As an artist, he’s exhibited his work across Ontario since the 70’s. As a teacher he fostered creativity and inspired a love of art in countless young minds. He played a mean bass in the 80s for the rock band Paradox – still does in fact. We encourage our readers to do a bit of Googling here, as the hair on display in Paradox is an art exhibit unto itself. He’s even been banned from indeed.com for hiring nude models. Get your mind out of the gutter – it was for a life drawing class he was teaching.

With a home studio near Lake Eugenia, Robert practices his craft in one of Ontario’s richest climbing destinations – the Beaver Valley. Cut through the cliffs of the Niagara Escarpment, the Valley boasts around 500 climbing routes. There’s a healthy mix of sport climbs, where permanent bolts line the route and climbers employ minimal gear, and trad or traditional, where routes lack permanent bolts and climbers carry more hardware than Home Depot.

Difficulty levels in the area range from 5.0 to 5.13d. It’s beyond the scope of this humble article to explain the indecipherable Yosemite Decimal System for grading climbs, so we’ll just say the area features climbs appropriate for absolute beginners (roped, helmeted, and with experienced friends) as well as for dedicated, strong climbers. This variety makes the area a haven for local climbers, and a serious draw for visitors looking to get in some cragging on the weekend.

Some of the inspiration for what has become Robert’s “Escarpment Series” of paintings comes from these visiting climbers. One such crag-fiend, in the area to lead climbing outings at nearby Metcalfe Rock, took out a short term rental at Robert’s home studio.

Robert, with a deep love for the natural beauty of the Escarpment, had already dabbled with a figurative representation of Old Baldy – the iconic Beaver Valley lookout, beloved of climbers and hikers both. He quickly realized, with his background in life drawing, that including climbers in his representations of local landmarks would allow him to enhance the storytelling potential of his work.

Says Robert; “Painting has traditionally been storytelling, as soon as you include a figure you begin to tell a human story, and this allows me to bring the figures to the landscape.” Nine of the twelve completed pieces in the Escarpment Series feature climbers, and each of them does tell a story. “These are people taking on a personal challenge,” says Robert, “to force themselves to the limits. As a painter that’s what I came here for too, to try and do things I cannot do, to reach beyond my grasp.”

Another significant inspiration has been photography featuring climbers on local routes – primarily the photography of Jesse Wong. Jesse is the brains behind the venerable Ontario Rock Climbing guidebook. The guide features beta on all known routes in this area and beyond, and it’s stuffed full of arresting images of climbers doing their thing. The first, largest, and perhaps boldest piece in the Escarpment Series is based on Jesse’s image of Will Tam climbing at Old Baldy. A gorgeous rendition of the classic view across the valley, with Will chalking up and considering his next move.

Of course Metcalfe, Baldy, Devil’s Glen and the rest of the Valley don’t own a patent on crags in the area. For heart stopping exposure (empty space around a climber), not to mention staggering views, there’s nowhere better than Lion’s Head. With about 250 routes, none of them rated less than 5.6, and a couple to be found on lists of the toughest climbs in Canada, Lion’s Head is a climber’s paradise.

Images from this area Robert has adapted include a shot by Jesse of Stas Beskin on Free Pelletier (5.11d), as well as Jesse’s shot of Susan Shapiro looking strong on Maneline (5.10b) – one of the classic Lion’s Head routes found on the broad cliff face immediately to the south-west of the Lion’s Head Lookout. If insane exposure is your thing it’s hard to top Nimbus (5.10a) which runs right up the huge overhang of the Lookout. Nimbus features a demanding crux and the promise of a pretty serious dangle above Georgian Bay should the climber come off the wall. A painting of Nathan Wood in the moments after just such a dangle features in the Series, and it effectively demonstrates why this activity is not for the faint of heart.

If you’re feeling inspired to tackle some of the legendary climbs in Grey-Bruce this summer then chalk up and climb on. But go with your buddy who climbs, pick up Jesse’s guidebook, wear a helmet, and leave the trail better than you found it. If all this talk of dangling in space has you feeling queasy, but you still enjoy the pretty pictures, look up Robert at wildwoodart.ca.

He offers art instruction for small COVID appropriate groups at his studio – including an awesome Old Baldy workshop. However you choose to spend your summer, whether it’s fist jamming cracks at the crag, painting your visionary masterpiece, or head-banging to some Paradox, stay safe, get creative, and keep challenging yourself.

The kick-ass women of the local jewellery scene