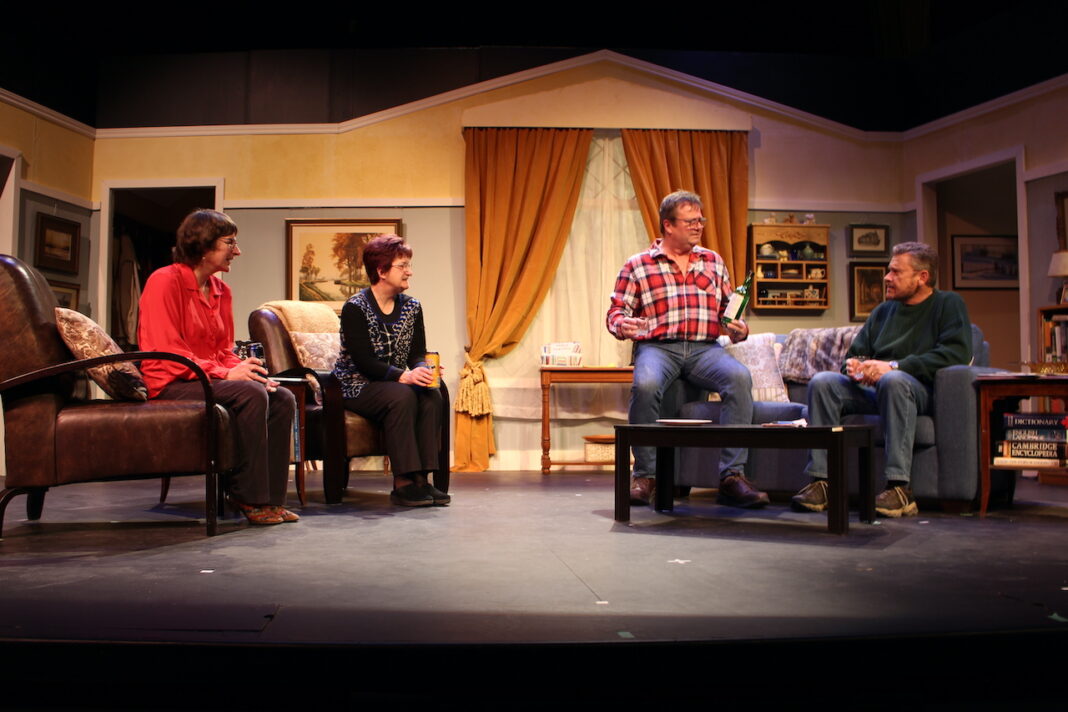 Fresh off yet another lockdown, the unstoppable company is about to hit the stage with their hard-earned production of A Red Plaid Shirt. It stands out as the first OSLT play to be produced entirely during the pandemic. This show is a testament to the dedication of everyone who’s been involved, as well as the comedic relief we all need right now.

A Red Plaid Shirt, written by Canadian playwright Michael G. Wilmot, follows the antics of two recently retired couples: Deb and Marty (played by Debbie Morris and Rick Twining) and Gladys and Fred (Dianne Thompson and Ben Davidson). Despite high hopes for this new, leisurely stage of life, the friends quickly realize that it isn’t quite what they thought it would be.

While Deb tries to reign in Marty’s sudden urge to buy a motorcycle and seek adventure, Gladys is desperate for Fred to get out of the house and do anything besides monitoring his vital signs. As a compromise, the men take on a woodworking class – but this turns out to come with its own set of surprises.

Between the snappy dialogue and heartwarming overtones, it’s easy to see why director Val Underwood has worked so hard to bring A Red Plaid Shirt to the stage. Underwood initially put forth her proposal for the show in 2017. Although it wasn’t selected for that season, she continued to champion it, knowing there was something special about the play. “When I first started to read it, it [was] so human… husband and wife banter, or exasperation, or frustration. And yet, underneath it there is real care.” Finally on the playbill, this labour of love has gone through countless obstacles due to fluctuating COVID-19 restrictions, yet come out strong, thanks to a dedicated veteran cast and crew.

“I thought, ‘How are we going to do it?’ But we did. It’s incredible… We still were able to gel,” says producer Kathleen Murphy. Now, with less than a week until opening night, their perseverance has paid off. Not only are the cast and crew eager to bring their production to the community, the community also seems just as happy for the return of live entertainment, snapping up tickets to both the in-person and virtual shows. As Murphy points out, “[Art is] what brought us through the pandemic. If we didn’t have our arts and culture, how would we have survived that?”

Perhaps the unexpected bonus of putting on A Red Plaid Shirt amidst the pandemic is that it’s likely to resonate with anyone who found themselves suddenly spending a lot more time with the people they live with. The retirement experience provides the framework for the story, but it’s more so a cheeky look at love and friendship in the face of best laid plans taking unexpected turns. And, really, who can’t relate to that? Best of all, it’s genuinely funny and lighthearted, something everybody could use these days.

The actors have “really pulled into themselves,” says Underwood, bringing comedy to the forefront of their performances. “That’s the hardest thing about directing it,” she chuckles. “I get so taken up with the humour and the story that they’re telling that I forget that I’m supposed to be watching things like sightlines and blocking.” (I myself had a hard time keeping the camera steady while trying to capture shots in between snickering.) It’s a refreshing break from the heaviness that many of us are feeling.

Viewing laughter as a necessary stress reliever, Underwood is thrilled that A Red Plaid Shirt delivers exactly this. “Emotionally, I think we need something light and lively,” she observes. The characters remind us to seek joy in life and connect with those we love, and to not take ourselves too seriously. “I’m hoping [the audience] will see a little bit of themselves in it. And if they can laugh at these characters… maybe they can laugh at themselves as well.”

It’s time to break out your best flannel and treat yourself to an evening of fun and feel-good entertainment. OSLT’s A Red Plaid Shirt is on stage at the Roxy Theatre February 17th, 18th, 19th and 23rd, 24th, 25th, 26th.

It will also be available to stream on demand from February 19th through March 6th. Tickets can be purchased for live and virtual performances through the Roxy website or from their box office, 519 371-2833.