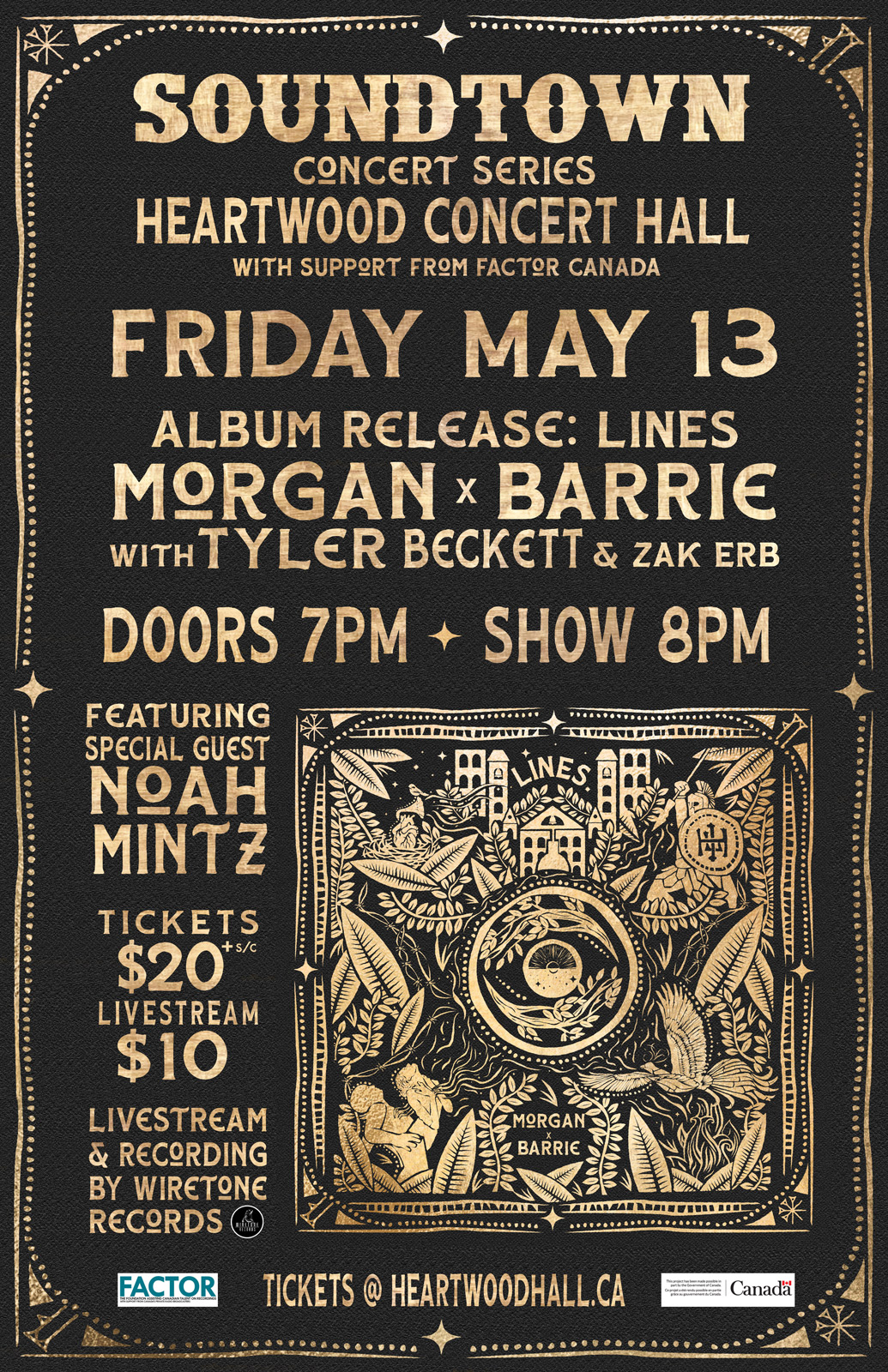 In Person OR Livestream Tickets Available!
https://heartwoodhall.ca/…/morgan-x-berrie-w-tyler…/
ALBUM RELEASE FOR MORGAN BARRIE’S NEW ALBUM “LINES”
About Morgan x Barrie:
Morgan Barrie is a Canadian singer-songwriter whose sound seamlessly intertwines warm guitar riffs and thoughtful lyrics. Morgan finds a way of opening the channels to your soul, singing about challenges all generations collectively face in the 21st century. He’s raw, honest, and slightly haunting. Morgan’s songs encompass topics of love, waste, and loss in equally passionate terms.
As an artist, Morgan takes control over all elements of the production process. From composing his music to recording, engineering, arranging and mixing the final product in his personal studio. Leaving nothing to chance, his ambitious oversight delivers a unique, personal and powerful sound signature.
In the depths of the pandemic, Morgan buckled down to complete his third album, Lines. Lines is set to be released May 13th, 2022 at Heartwood Concert Hall. This newest album is truly a listening experience, an ambitious yet seamless concept album that takes listeners on an epic, heartfelt journey through the human struggle to make sense of their place in the world around them.
Barrie’s solid musicianship, composition and production is enhanced by a rich tapestry of collaboration woven throughout the album with contributions from an array of notable artists including Lisa Lobsinger, Kyle Crane, Mark Mariash, Aaron Goldstein, Tyler Beckett, Matt Epp, and Christina Martin.
Morgan continues to develop his abilities as an artist and a producer in his home studio in Owen Sound. Through his experience playing live and recording albums Barrie has learned how to connect with listeners and tell stories important to today’s complex environment.
For More About Morgan x Barrie visit www.morganxbarrie.com/
About Noah Mintz:
Noah Mintz is a Canadian rock singer-songwriter, guitarist and mastering engineer. Mintz founded the band hHead with Brendan Canning in the 1990s. He released solo material under the name Noah’s Arkweld following the breakup of hHead. Leslie Feist was the original bass player of Noah’s Arkweld.
He works as a mastering engineer at the Toronto studio Lacquer Channel, where he has worked on albums by Daniel Lanois, The Constantines, Sarah Harmer, Arkells, Broken Social Scene, Billy Talent, Death from Above 1979, Dual, The Marble Index, Danko Jones, Rheostatics, The Dears, Len, Hayden, This Rigid Empire, Uncle Seth and Stars.
About Tyler Beckett:
Tyler has established himself as a valued multi-instrumentalist in the country and bluegrass music scene. After university, Tyler toured extensively throughout the United States with IBMA nominated contemporary bluegrass group, The Chapmans. After returning to Canada, Tyler continued his free-lance and recording career with several artists, including a Canadian Service Tour to Afghanistan with Jason McCoy, and shows throughout Canada and China with Dan Davidson.
For More About Tyler Beckett visit www.beckettfamilymusic.com
+ Google Calendar+ iCal Export